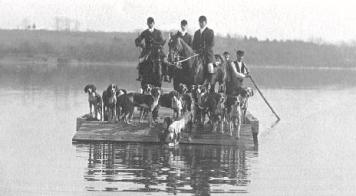 Photo from the Museum of Hounds and Hunting in North America , thought by some to be LH hounds crossing the Potomac River on Whites Ferry.

The Loudoun Hunt has a rich history in Loudoun County, Virginia. Many locally important and historic figures have featured prominently in the Hunt's more than 100 year history, from former Governor Westmoreland Davis, who served as LH Master of Foxhounds in the early 1900s, to First Lady Jackie Kennedy who occasionally hunted and showed horses with the Hunt in the 1960s. In 1894, the Hunt was originally established as the "Loudoun County Hunt Club," hunting American foxhounds with our Kennels located in Leesburg. Between 1894 and 1903, Loudoun Hunt hunted a trencher pack made up of hounds from David Tennant and William Heflin. In 1905, the Hunt was officially recognized by the then NSHA (National Steeplechase and Hunt Association). The National Steeplechase Association (NSA) eventually dropped the 'H' from its title after it ceased to have an active role with hunting. Loudoun Hunt was first recognized by this Association in 1903 with our country first being recorded by the MFHA (Masters of Foxhounds Association) in January 1920.

In 1906, the Hunt purchased the entire pack of hounds from the Piedmont Hunt. Between 1906 and 1908, the territory was hunted by A. Henry Higginson's Middlesex Foxhounds on an alternating schedule with the Loudoun Hunt. In 1906, the Kennels were relocated to Westmoreland Davis's Morven Park, according to A. Henry Higginson. Mr. Higginson's hounds were kenneled at Mr. Davis's "Big Spring Farm." Also in 1906, the Hunt purchased a small draft of American foxhounds from Mr. Bywaters of Culpeper, which began a breeding line for future Loudoun Hunt hounds. Mr. William Heflin hunted his own pack of hounds as "The Loudoun Hunt," and was lent the Hunt's hounds in addition. Mr. Heflin had hunted the country for twenty-five years with his own private pack. Between 1908 and 1910, the Loudoun Hunt country was hunted five days a week by Loudoun and Harry Worcester Smith's Grafton Hounds, again on an alternating schedule. 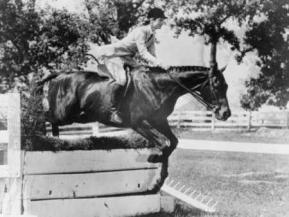 Between 1912 and 1915, the Hunt was operated by a Committee, instead of by traditional Masters. In April 1912, LH Master Clarence Moore perished in the sinking of the RMS Titanic on her maiden voyage; Moore had been pivotal in setting up the Chevy Chase Hunt Club in Washington, D.C. In 1915, the Hunt purchased the dog hounds of the Middlesex Hounds and incorporated them into the Loudoun pack. In 1922, the Hunt was given up, but was re-established and re-recognized by the NSHA in 1929; in that year, the country was officially recorded by the new MFHA. In 1930, the Kennels were re-established two miles south of Leesburg. During the war years of 1943-1946, the Hunt was inactive, eventually being re-established and re-registered in 1946 and re-recognized in 1947. From 1972-1994, the Kennels were located in Leesburg for the American pack and at Hillbrook Farm, Hamilton for the English pack.

In 1994, the two packs of the Loudoun Hunt divided, with the English pack kenneled at Hamilton designated Loudoun West. The Loudoun Hunt continues to hunt American hounds in our traditionally established territory. In 2019, the Loudoun Hunt will celebrate its 125th anniversary

Whether you have ridden to hounds for a lifetime, or are just learning about fox hunting, we at Loudoun Hunt want you to come and enjoy the many aspects of our sport with us!So what will you find while hunting with the Loudoun Hunt?

Check out our Fox Hunting & Events page above for current News, Events, Meet Times and Locations, and General Updates...we hope to see you out hunting with all those at the Loudoun Hunt!

Not interested in riding? No Problem! All are welcome to attend our social events, and we often have individuals who follow hounds and hunting on foot.